The Ballad of Kim Darrow

If you are a special case
(dazed, bewildered
articulate, seething)
perhaps you might care
to send the judge a crayon
for signing her orders
or use a pen or pencil
to send her your opinion
here is her address:
[ ____ ____ ]*

For more on Judge Duberstein see David Firestone, For Their Own Good? With Public Pressure Mounting to Get the Mentally Ill Off the Streets, Lawyers Say They Don't Always Get a Fair Hearing, NEWSDAY, May 31, 1989, and Committed Against His Will For Medical Student, a 5-Week Psychiatric Ordeal (NY Times, Oct. 1996.)

Note: The following is copied from a handbill distributed at a protest in front of Brooklyn Supreme Court, probably some time in 1996. The kangaroo sign is from the same protest, as is the photograph. 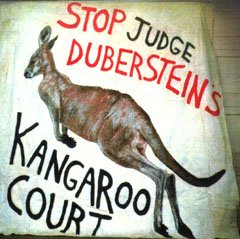 The poem above was written by a survivor of forced treatment and psychiatric justice.

Today, 360 Adams Street is the site of an award ceremony in which Judge Maxine K. Duberstein is being honored for her "caring and concerned attitude toward mentally ill patients." Her concern rarely if ever extends to impartial justice, legal standards, or the dignity of the people whose mental status is at issue in her courtroom. The above incident really took place! The doors of Judge Duberstein's courtroom conceal an extraordinary abuse of judicial authority and open bias against people with disabilities. Over the years in which she has controlled Brooklyn's mental health proceedings, there have been few occasions when Judge Duberstein has not granted psychiatric applications for incarceration and forced treatment. People alleged to be mentally ill are subjected by this judge to antagonism, bias, and abuse of dignity throughout the legal process. Her conduct merits sanctions -- not awards.

You've been locked up in a psychiatric hospital against your will. Maybe your family got a warrant or called the cops on you, maybe you went into the emergency room and they kept you. The hospital wants to give you powerful drugs. You don't want to be drugged, and you want to get out.

This is your day in court. You know you're not suicidal or about to attack anyone. You know you have a right to refuse the drugs. You think the judges will listen to your side of the story, and maybe you will get out.

Judge Maxine Duberstein has held onto the Mental Hygiene court in Brooklyn as her private territory for 12 years. Her alternate, Judge Reinaldo Rivera, has apparently been sworn to uphold the traditions as she established them.

You might have seen leaflets about Duberstein earlier this year, when we were trying to stop her from being recertified. Although she has decided to resign at the end of this year, Rivera in the driver's seat is nothing to look forward to.

Several times in the past, people had attempted to put in a rotation system, where judges would serve in this part for a month at a time. There is a 1ist of five judges, including Rivera, who are supposed to participate in this rotation. (This is how it is done in other boroughs.)

If you wish to participate in the campaign to bring fairness and justice to the Mental Hygiene Court, please contact us at the address below. You may also write to Judge Jonathan Lippman, Chief Administrative Judge, 270 Broadway, New York, NY 10007, expressing your concerns. 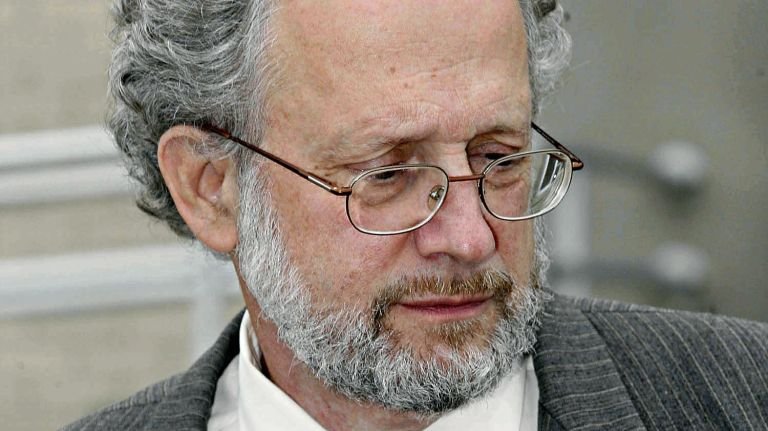